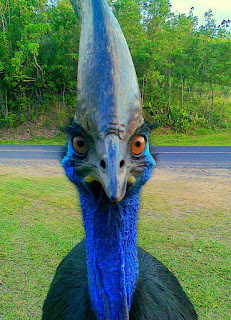 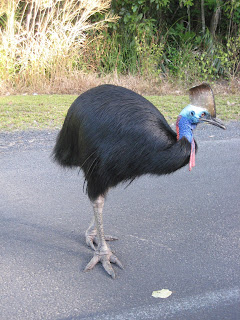 Think of it as death by modern day velociraptor*. The cassowary (Casuarius casuarius) is a large bird (~6') that sports 5-inch claws and runs very fast (~31 mph). It is considered the world's most dangerous bird. Why in the world would you keep one in your yard?

Leave it to one Florida man who found out the hard way that a cassowary doesn't make a good pet.


* [The Blog note: I use the term velociraptor loosely and only because it is highly recognizable as opposed to the actual fierce dinosaur bird, Deinonychus, which few are familiar with. Thanks for perpetuating the lie, Jurassic Park franchise.]

That bird is incredibly cool, but I will decline bringing one home as a pet.

Is a Darwin Award being handed out?

It probably wouldn't like being walked on a leash or playing fetch.

What LL said. Wild animals should live wherever they want.

Good point about velociraptors. Apart from the fact that dinosaurs
and birds share a similar bone structure and reproductive organs, they
have nothing in common. The way I put it is if it looks like a lizard,
walks like a lizard, and quacks like a lizard, it's a lizard!

PS I remember reading somewhere that velociraptors being about the
same size as a mid-sized dog!

I guess he learned his lesson.

Maybe we could put those birds in a park and call it Jurassic Park... sell rides with Jeeps that course through the park. Occasionally the Jeeps break down and you have to run for it?

All I want is the t-shirt and trinket (landfill) concession.

Wild animals never make good pets! It takes generations of intentional breeding to create a tame species, and the creature needs to have a reason it will tolerate being around people, too.

If you want to see wild animals often, buy a season pass to the zoo.

I thought I had posted a response here on Monday but don't see it. I think I got so excited about the story of this bird that immediate research was calling me. I had never heard of a Cassowary before and found it amazing. People want them for collectors items. Crazy people!