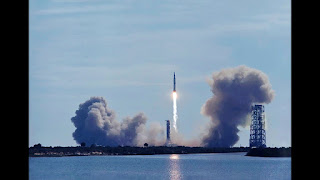 At the time Apollo 11 launched I was twelve and thinking why were we going to a dead moon rather than the more fascinating Mars.

A lot of science and math courses later, I realized the amount of drive and talent and money it took to achieve a feat, that in fifty years, no other country in this world has duplicated.

I thought that the moon landing was a significant feat. I was 17 at the time, but not paying ALL that much attention to things not female.

I did have some thoughts about all (well some) of the people who have dreamed going to the moon over the years including the Chinese guy who essentially put rockets on what was little more than a lawn chair and blasted off one night to get there. Wonder what happened to that dude. :)

See if you can find a video showing the launch projected on the Washington Monument
This might work.
https://www.fox4news.com/news/418308189-video

You mean the moon landing wasn't a hoax?

Since i was 6, i didn’t understand much about it. Now the first space shuttle launch, that happened when i was a senior in high school, that i remember and was very excited over.