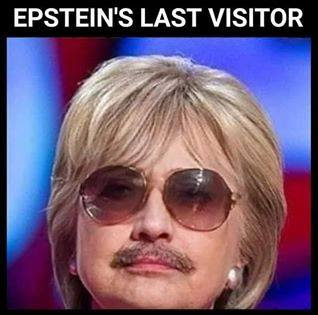 Jeffrey Epstein Has Died By Suicide In Jail

Maybe she slipped him a My Pillow.
Posted by cube at 3:47 PM

He attempted suicide, but they took him off suicide watch so that he could have visitors...

She expressed her regrets several weeks ago for Epstein's impending death.

My only surprise in this matter is that it took so long.

LL: Isn't it ridiculous? A high-powered prisoner is suddenly taken off suicide watch and the guards don't make visits every 30 minutes anymore. Ooops.

Ed Bonderenka: My thoughts exactly but without proof, we have zip. That's the way these things usually work out.

Messymimi: I thought so too, but even at it's glacial pace, we're farther along than we would've been had Hillary been elected. All of this information would never have seen the light of day. We must revel in our victories however small or late in coming.

Above is what Taz thinks so...

I don't think we'll ever know the details of Epstein's death. There is too much money involved.