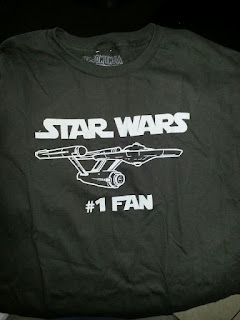 Hah! Well, THAT would subvert expectations! [1]

Yeah, looking at you, Jar Jar Abrams. I've never been a big fan of either Star Trek or Star Wars, but between Disney, Kathleen Kennedy, the weirdly-round headed Ruin (sic) Johnson, and yes JJ Abrams I feel a lot of sympathy for those who do love ST and/or SW. Those persons listed above, and their ilk, have taken beloved pillars of modern mythology, and mocked and diminished and outright killed them [2], while attempting to skim off every last iota of value from the associated franchises. But then again, no different from what their financial-sector globalist counterparts have gleefully done to American industry and manufacturing.

[1] "subvert expectations" is what the lazy writer says when he writes something idiotic and implausible within the logic of the story and universe. Like Arya Stark popping up out of nowhere and killing the Night King with her little dagger.
[2] Surly Luke drinking green "milk" fresh-squeezed from some bizarre hideous sea creature, and getting his Jedi Master ass utterly kicked by the untrained Rey wossername; whiny Emo Spock from The Michael Burnham FanFic Show, also known as STD. Only with this STD it's suffering all the way; at least with traditional STD you at least presumably had fun acquiring it.

I hope you get that shirt.

My son had a Star Wars theme wedding and has an authentic lightsaber hanging on his wall so he would compete for it.

Yea, shouldn't that be the millenial whatever on there? I don't think the kids are going to buy many of these as it seems their very lives revolve around Star Wars movies.

Jan: I have two light sabers, but neither one of them is "authentic." Does that mean that actually work? I'd love to see that.

The best I have is a Star Trek phaser pistol that shoots water. It can be lots of fun.

There are so many Star Ship Enterprises based on the same series - but in divergent timelines. You could have a dozen shirts with different designs and they'd still be technically correct. The only real space ship enterprise is a US Space Shuttle...but not a star ship.

Kid: I have two millennial daughters and they like Star Wars more than Star Trek. As far as the new Star Trek goes, I hate it. It's godawful drek. Trek 2.0 is dead to me.

Messymimi: It tickles me too. I want one of those shirts.

I haven't watched Star Trek since TNG (Jean Luc). Q was kind of an interesting character, as was the Borg and several other concepts introduced with that series. Bona-fido good series tackling societal conundrums like the 1st STrek. Beyond that I dunno, haven't watched. Don't really care to see an idea driven into the gutter. Need new ideas.

Kinda like pro-sports. Football turned into Thugball and none of it interests me anymore anyway. Was never into hockey, soccer, or B-ball. I have much more valuable ways to spend three hours of my life on weekends or week nights. Haven't watched any of it for at least 20 years.

Cube, more to the point.... Star Trek tackled real life issues we deal with. Racism, Religion, I'm sure you can think of many. Star Wars didn't deal with this at any level, it was all just super hero type stuff. The individual against the evil empire. Much more shallow. I mean Superman was a good story but it certainly never addressed societal issues.

Roddenberry was a talent that provided a very rich story line relevant to what we all deal with today. Star Wars was and is just a fictional that isn't connected to the present. Fine but Trek as much better.

Ed Bonderenka: OK, you have officially declared yourself as old with that reference and so have I by recognizing it. 😁

Kid: The killing of Star Trek began with Jean Luc Picard. The rest is history.

Cube: the TL;DR is that both Star Trek and Wars have been taken over by the Usual Suspects and injected full of social justice tropes (moreso than than original Star Trek). What is worse, the new movies/shows suffer from bad writing, even putting the clumsy political messages aside.

So here are a couple of reviews/commentary from this fellow calling himself "The Critical Drinker" on recent Star Wars and Star Trek. NSFW for language.

The Last Jedi, and the Assassination of Luke Skywalker
https://youtu.be/Wr5A93glKqk

Star Trek: Into Darkness is a Terrible Movie
https://youtu.be/Xiicw42ti5A


As to STD (Star Trek:Discovery) I haven't even got words. To be fair I've never watched a full show, but from the few clips I have seen on YouTube, it's dreadful. The central character is a black human woman named CDR Michael Burnham who is Spock's adopted big sister, and she is the bestest evar at everything. In the first episode alone Burnahm physically assaults her captain, illegally takes control of the ship, and starts a war with the Klingons (who now have the motto "Remain Klingon" which the writers explicitly say is meant to reference "Make America Great Again" -- yuh know, 'cause us cousin-humping hicks are, like, Klingons). It gets worse from there.

Mike_C: I loved ST:TOS and ST:DS9. I tolerated ST:TNG and ST:VOY. ST:ENT was hard to watch. I watched the first Trek movie and I thought it was a very bad idea to go to the Trek 2.0 timeline. Destroying planet Vulcan? Seriously? And then remaking "The Wrath of Khan." It's just one stupid idea after another which is why I've never watched Discovery.

Funny how you refer to the "new" Klingons. If we're not virtue signaling liberals, we're all deplorable knuckle-dragging troglodytes or Klingons.