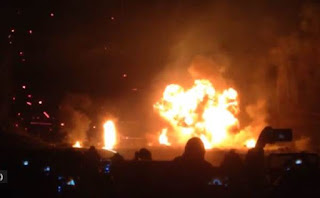 ABC News played video this weekend of Turkey bombing the Kurds in Syria.

Turns out the video is not from Syria. The video is from a Knob Creek Machine Gun shoot in America back in April 2016.

The level of desperation in the democrat camp is reaching critical mass.

Seriously, how much lower on the believe scale can they go?

They are set on destroying themselves and they are doing a fine job. Good for them.

I guess I'm net happy they are keeping the TDS people on the edge of their seats. :)

Jan: Every time I think that, they go even lower. I don't see any of the other networks reporting this so it's like it never happened. So if one day you bring it up, they call you a conspiracy nut.

Sandee: Not enough people know about it so it's like it never happened. No one will remember this by next week unless it's reported and they sure as hell aren't going to do it. Fox is asleep at the wheel.

SO WHO'S TELLING AMERICA ABC DID THIS???? Nobody! THAT"S WHO! No WONDER they hate Trump and love the stinkin' idiot Dems...who I just saw debate........
I think they were venezuelans, not AMERICANS :-(

It's enough to make you pull your hair out that this stuff is ignored.

Z: I haven't hear one word about it. You'd think this would be newsworthy, but they're all covering their own butts and aren't about to rat out someone who's doing the same thing they are doing.

I have heard that CBS vice-chair Shari Redstone ‘is looking into launching a rival to Fox News ...' Time will tell on that endeavor.

Messymimi: Yes, it's hard to remain patient in light of recent events, but we must not lower ourselves to look like the opposition. They're just plain pathetic.