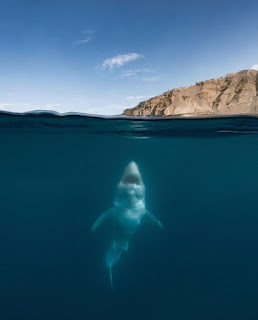 The Predator That Makes Great White Sharks Flee In Fear

Forget what you've seen in the movies, scientists have observed many instances of great white sharks hustling out of the way of killer whale pods, aka orcas, lest they risk losing their lives and their livers.

Apparently, orcas enjoy great white shark livers with a little Chianti. Science is still out on whether they like fava beans. 😉

Truth is, the orcas kill great white sharks and many other sharks for their livers and leave the rest of the carcass to wash up on shore.

Just when you think you know Shamu, he turns out to be way more complicated that you thought.

Orcas are 'the' apex ocean predator. Great Whites are 'an' apex predator.

LL: So subtle that it almost sounds like a distinction without a difference. Orcas are the alphas, but Great Whites are the alphas when the orcas are out of town.

Kid: Excellent video, but I still wouldn't call them big babies. White sharks are still capable of massive damage when they're hungry. Ocean is an extraordinarily brave woman to do what she does for a living.

Just kidding with the babies thing. I would shoot myself in the head before I'd hop into the ocean with a great white.

In my mind, it's like asking if i want to be eaten by a lion or a tiger. Thanks, i'll watch them all from a safe distance.