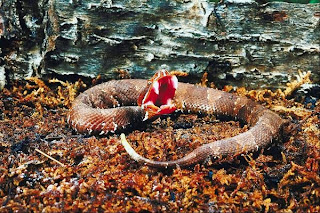 This is one for the, "What In The World Were You Thinking?" file:

The Florida Cottonmouth, also known as the Cottonmouth Moccasin, a Water Moccasin, a Moccasin (Agkistrodon piscivorus conanti) "is a venomous snake, a species of pit viper, found in the southeastern United States. Adults are large and capable of delivering a painful and potentially fatal bite. When antagonized, they will stand their ground by coiling their bodies and displaying their fangs."

My husband sees them on the golf course and has seen many a smart golfer just walk away from a ball near this snake.

Play keep away... no kissess.

Crikey I would run a mile from that let alone try and kiss one haha!

Have a slitherytastic weekend & thanks for hissing by :-)

You're a smart man.

It's unbelievable how dumb some people can be, isn't it? How in the world would one keep a venomous snake on their bed in a pillow sheet and then kiss it, not once, but multiple times?

Sandee: I grew up in NYC, but a large part of my later upbringing took place in Florida. I quickly learned which snakes to stay away from and which ones I could pick up and play with and I did.

I totally agree that it wasn't the snake's fault because it was the fault of the idiot human who attempted to kiss it.

This is so sad.

Was that teenager crazy? How stupid!
I hate snakes even the small ones. When I see one on the golf course, I make sure I hit ball away from the thing. Have a slithery day Cube.
See ya.

I think it's a typo; I think they mean SNAKE HISSES :-)

Cube - What on earth was this man thinking - kissing a snake. He surely was out of his mind to even think about it. Didn't he know that it was a poisonous snake? I wouldn't even kiss a harmless garter snake. Stranger things have happened - I suppose. But I can't think of any.

Hmmm... and people thought I was strange for keeping a wolverine in my pillow case :)