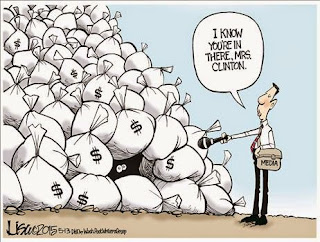 In this American Thinker article, Daniel John Sobieski asks whether we hold NFL quarterbacks to higher standards than presidential contenders...

Sobieski writes, "We should all be asking ourselves just why there is more concern and angst over Tom Brady’s use of slightly deflated footballs to get a better grip and improve his chances of winning a football game than regarding Hillary Clinton’s use of private email accounts on a private server and her deleting of 30,000 emails to improve her chances of winning the White House in 2016."

Let's not forget that Brady didn't bring us the horrendous events in Benghazi, or lies about undergoing sniper fire in Bosnia, or the acceptance of millions of dollars from donors (foreign and native) in exchange for favors.

Hillary hasn't answered a single question since April 21st... and the media is fine with that.

This doesn't surprise anyone. If you get to vocal about the Clinton's you'll end up dead. So many others have.

It is hard to believe in coincidence when death is concerned. Deflategate is getting a lot more attention that all of the many Clinton scandals.

It is sad to hold a sports figure to a higher standard than a person who has helped run the country.

I'm getting used to this, but what the hey ... When the media loses all of their listeners, watchers, and readers they just won't matter any more.

Sandee: Clinton critics do tend to be
'accident prone'. Hill & Bill are probably still profiting from the information in the stolen FBI files, too.

Jan: It's a sad state of affairs when deflategate gets more attention than
Hillary "too-numerous-to-list-gate" Clinton.

Given the mindset of so many American voters coupled with the democrat predilection for voter fraud, I see no reason why the PIAPS can't be elected president despite the many scandals.

messymimi: It is a sad state of affairs.

Woodsterman (Odie): MSNBC is already on it's way to irrelevancy. Let's hope the rest follow suit.