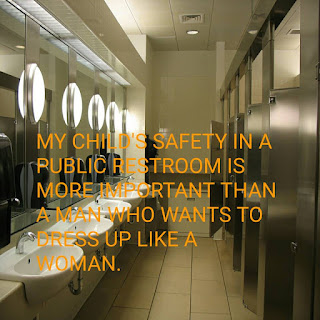 The vocal LGBTXYZ community needs some boundaries and this is one of them.
Posted by cube at 1:47 PM

That's not very progressive of you.

Freaks and perverts wrote the law for themselves and their friends and you're objecting. How dare you? ;^)

Yep, you want something you find a way to get it. That's what this weirdo did. A sex offender is a sex offender. This is a bad idea. A really bad idea.

Yeah, Cube. Aren't you being hard on sexual offenders who might want to molest children in public bathrooms. Sadly, this whole story is not so surprising

This is why i like the family restrooms. It's a scary world.

Yep. Once again the idiots will stumble upon the 'Unintended consequences' and not blame themselves for one iota of it. And honestly, it was the republicans that caused this. And global warming too.

Thank goodness I am not a younger man with school-aged children any more. I pulled my 3 boys from public schools about 10 years ago for a whole lot less. I'm afraid what I'd be capable of were I trying to raise young ladies in today's twisted society.

LL: How in the world did you guess that I wasn't part of the progressive world domination plan?

Sandee: You and I know this is a bad idea, but why are so many huge corporations going along with this patently bad idea? That's what frustrates me.

Jan: Had I gone to law school, I would've been a prosecutor. I choose that big money maker science instead ;)

Messymimi: Quiltent Northern toilet paper reminds us that the bathroom experience is something that is forgettable. Why are we expending so much energy on something so forgettable? You go in, do your business, and go out. No big deal, right?

Kid: Yeah, the republicans are responsible.

DaBlade: I hear you. We educated our girls in private Catholic schools because the public schools in our area were unacceptable. They've both grown into intelligent adults and we don't regret a single dollar spent on their education.

And you know how Bruce Springsteen canceled his concert in N. Carolina....out of anger at the LGBT bill there....
A great facebook comment is "Good on THE BOSS, he canceled his concert so men can now pee next to little girls, in the same bathroom".
and that's the truth, isn't it....what a JERK!

Z: Here's another way to look at liberal hypocrisy:

So Bruce Springsteen and Paypal can refuse to do business in North Carolina because they disagree with a law there, but Christians are not allowed to refuse to participate in a celebration of homosexuality...

Plus Springsteen denied thousands of concert goers his own business because he didn't agree with NC laws.

So who is actually being denied equal protection here?

Cube, Liberal Hypocrisy - Nicely Done. Yes, a Maximum Hypocritical Evaluation and its associated Qualification License is required to be a libtard. It's in everything they do.

I made a rare comment on an article, and was attacked, insulted, threatened by the libtard or muslim trolls. I made a reply, Gee, here are folks who get absolutely violent when they disagree with someone else's opinion. They must all either be libtards or muslims.

Z: I was never a fan and he's not the boss of me. I don't care what his personal views are, but I do care about the sheeple that will follow his lead because of his celebrity.

Kid: The left is free to call the right every name in the book, but the moment we retaliate, we get verbally attacked, sued, or arrested. Just my opinion, but I think that may be one reason for Trump's popularity... he gives it right back and gets away with it.

I'll testify to that. I don't trust him or like him but the harder they pour it on, the more I want to vote for him.

We need to start suing Them. I'd contribute to a Conservative ACLU type thing as long as they were accomplishing things.