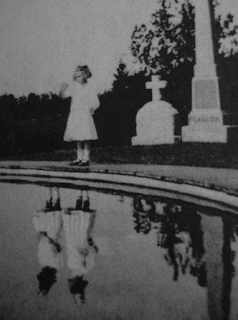 That is full blown creepy unless it's photoshopped.

It is kind of creepy and I like it.

Have a fantastic Wordless Wednesday. ☺

Jan: It is very creepy because when this picture was taken, there was no such thing as a computer.

I had the opposite thought. I assumed it was a deceased sister and found it comforting.

Since it isn't Wordless Wednesday anymore, I can now tell you the backstory. The girls were twins and very close. When one died, the surviving twin was inconsolable. The family took
to visiting the child's gravesite because being near her sister comforted the surviving twin.

On this occasion, the father took the picture of his little girl standing by the shallow fountain near her sister's grave. It was only after the negative was developed that the family noticed the eerie reflection.

Over the years, the father tried many times to recreate the presence of his daughter in a photograph, but it never happened again.