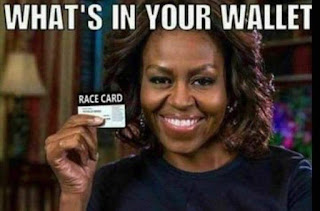 Good news, criminal, you just might qualify for a Jussie deal.
Posted by cube at 4:47 PM

No, they don't have the celebrity to do that. They aren't gay either. Or have Soros money behind them. What a crock.

Sandee: He might be gay, but he's definitely black so he's farther along in the privilege chain than we are 😉

I think the Gay card trumps the Race card.

Messymimi: It makes me wonder where all this insanity will lead.

Ed Bonderenka: I think it does now, but this guy has hit the trifecta... gay, black, and with well-heeled friends of the lefty persuasion.

So, do you think she is Michelle or Michael ?

Unless this video is doctored, it's hard to argue against her being male

Kid: Lol. I think that if we go by these insane democrat world views, Mochelle can be both simultaneously. Think about that.

Cube, even I can't believe how far this country's going with this crap......RACE CARD, indeed....and GAY CARD is SO important. Smollett really hit the jackpot being gay AND Black....
And they play on that and prey on that....benefit from it, whine about it, talk it up, want reparations for it, etc.
And Conservatives just want everyone to have a good life and don't hurt anyone. And we're the nasty party, according to the Left?

Z: It's insane. it's not just Race & Gay, but the WEALTH card. Juicy Stoillet has all three!!!