No Bow For Bibi 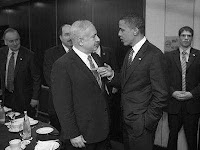 not only is there no bow, but it looks like obama is thumping netanyahu in the chest. wtf?

I'm not sure about the bowing, but I am sure I'm tired of muslims pushing others around.
I just read where they want "Year of our Lord" off diplomas at Trinity College, a Christian institution they're saying they just realized was Christian on their graduation.

When's this going to stop? Just live here...it's not a muslim country; get used to it.
And, internationally..we've got Iran celebrating NUCLEAR DAY today and other muslims are going to insist Israel disarms? Ya, RIGHT.

Bibi has better things to do that meet with BHO, who treated Bibi shabbily at their last meeting.

Good for the Israelis. Why should their Prime Minister attend the conference when he knows it is a set up and he will be attacked by the Arabs.

Why on Earth would Bibi go to a meeting (especially after BHO's previous treatment) where he can expect to be excoriated for his nuclear program while the Hitler of Iran gets a near total pass?

I wouldn't go, either.

I'm with others here in that I support Netanyahu's refusal to go. It is refreshing to see a world leader stand up to Islamic extremism.

As far as bowing, Hussein isn't going to bow to him - he's not a Muslim.

THANK YOU FOR POSTING THIS!

ps. Would you care to exchange links?