All The Evil Racists 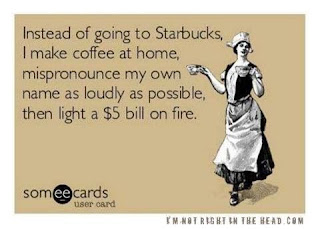 WALSH: Remember When Starbucks Caved And Opened Their Bathrooms To Non-Customers? Here's How That Worked Out.

A cautionary tale for those who ignore logic and reason only to listen to the anguished wailing of the lunatic left.

I refuse to patronize Starbucks for those reasons you cite. There is an exception. I bought a beverage there a few times last year and gave my name as "TRUMP" to force them to yell, "TRUMP! TRUMP!" when the order was complete.

LL: LOL. That's hilarious. Unless you count the one at my local Barnes & Noble bookstore, I've never been to a Starbucks, but I might make an exception just to use the name Trump.

I don't go to Starbuck's either. I enjoy my coffee right at home and it's a lot cheaper. I laughed at LL comment. Brilliant.

Link's dead. But I think this is GREAT. I WANT the name "Starbucks" to be associated in the public eye with dirty needles strewn about; smelly insane men screaming at space aliens, at the Trilateral Commission, and at chemtrail-spewing aliens who are on the Trilateral Commission; threateningly aggressive panhandlers; and hepatitis-laden feces smeared on every surface in the bathrooms.

My only regret is that Howard Schultz is no longer CEO of Starbucks, because if the rumors of his political (i.e. Presidential) apsirations are true, I want all the horrid stuff listed above linked to his name in the public imagination.

Living in a smallish conservative area in North Idaho, needle disposal at Starcrap is not an issue. I don't go to Starcrap 'cause I think their coffee is terrible. I can get a decent cup of plain coffee at the grocery store and don't have to be surrounded by coffee snobs and save a ton of money. That being said, I may have to go there at least once so I can try LL's idea - just for sh*ts and giggles. However, I'm sure the majority of the employees and patrons are Trump supporter, so - it becomes a whatever.

Opening your rest room to every degenerate in the area. What could possibly go wrong?

I do feel sorry for the employees who have to deal with this insanity.

The tards have no idea what works and what doesn't. Part of this problem is that many have not been educated to seek facts, only the emotional and self-esteem side of the equation. Without facts, it is impossible to make competent decisions.

All that over two black dudes who were probably jack wagons anyway. These process do not create or contribute to a working society. We must find a way to isolate ourselves from these morons if we are to survive. I'm serious.

Picture 1 million great successful people being dragged into the abyss by 100 million zombies and that's my image.

Love the TRUMP idea though !

Reminds me of the story of Hiney the Mule. Grandpa and grandson are going to town with their mule, Hiney. First the Grandpa is riding, but someone on the way comments on how selfish he is to make the boy walk. He lets the boy ride, and someone comments on how selfish the boy is for making Grandpa walk. So they both ride and someone says it’s awful they make the poor mule carry them, they should carry the mule. The pick Hiney up and slip going across the river, and Hiney gets washed away.

Try to please everyone and you will lose your Hiney every time.