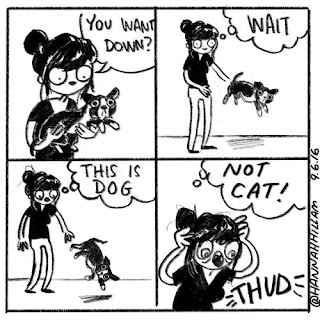 "some friends of mine have the most un-cat-ish cat i have ever met
my quintessential example of this:

i was holding him in my arms petting him while we were picking out what games to play that night. when we’d decided on a few, i needed to put the cat down in order to, you know, carry boxes. so i started letting him down, expecting that he’d eventually do the cat hop thing… but he never did.
i ended up lowering him all the way to the floor. and even then he never got his feet under him. i just sort of… plopped him down on his side as he stared up at me like a betrayed sack of flour."

The phrase "he stared up at me like a betrayed sack of flour" cracked me up.

Some cats don't act like cats, but dogs usually always act like dogs. I do want to know how you can betray a sack of flour though.

Sandee: I thought the dramatic license she took about the sack of flour was humorous. And you're right about dogs acting like dogs. Cats like to mess with your head 😊

Too funny! I've never had a cat behave that way - it must've been a true dog/cat!

But the cat wasn’t finished being held!