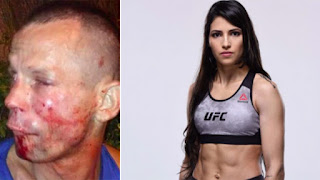 Creep Tries To Rob Woman Who Turns Out To Be UFC Fighter. He Should Have Stayed Home

UFC strawweight fighter Polyana Viana said, "I threw two punches and a kick. He fell, then I caught him in a rear-naked choke."

Unless you're a mixed martial arts fighter, don't you try this at home. Carry a gun instead.
Posted by cube at 8:47 AM

It reminds me of lyrics from an old Jim Croce song, "you shouldn't mess with people strange to you, even if you do have a two-piece, custom made pool cue."

She IS a concealed weapon. :)

There is so little justice anymore. This made me smile. You go girl.

Have a fabulous day and week, my friend. ♥

A gun is a great equalizer of strength.

Wonder if he learned his lesson? Probably not. Glad she got him so good anyway.

Good Deal. Nice to read these on occasion with all the vermin stories littering the news.

Glad to read she is safe and sound.