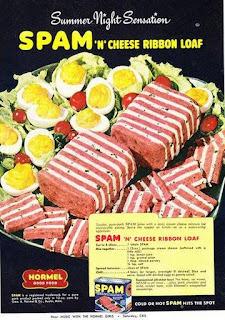 FTA: "Does anyone really know what Spam is exactly? Well I do. Spam was created for the military during WWII in 1937. Yes, it's military meat - canned cooked meat made by the Hormel Foods Corporation in Austin Minnesota. I know this, because I've seen their plant - and the air around it smells like Spam.

Spam's basic ingredients are pork, with ham meat added, salt, water, modified potato starch as a binder, sugar, and sodium nitrite as a preservative. Natural gelatin is formed during cooking to give it that Spam shape."

Above is an actual recipe from the '70s.

We have Spam in our garage pantry - Mr. Cube bought it- and yes, I have seen him eat it fried and incorporated into an omelet.

All I can say is, I'll eat it if I'm in survival mode.

Hubby loves spam. He eats it all the time. I'm with you. I'll only eat it in survival mode.

I love Spam fried sandwiches. Thinly sliced, crisply fried, white bread (not good), and lots of lettuce and mayo. Spam is actually quite a high quality product and should not be scorned. It's lower cost competitor, Treet, not so much.

I'll eat in survival mode once I run out of Dinty Moore Beef Stew.

I like spam (untried) sandwiches. Ideally it's on dark bread: squaw or pumpernickel, add some hot mustard. I've prepared sandwiches like that for hunting trips and the like when I need a hearty sandwich in my pocket. Oddly enough, I never ate it in the military, but my father said that was the primary meat of the Navy when he served in forward areas on ships in combat.

It has a lot of salt in it, but other than that, I think that it's good enough.

And, of course, it's exceptionally popular in Hawaii.
Another favorite of theirs is Obama.
And Senator Maizie Horono.

There's nothing technically wrong with it, i just don't like the idea of eating unknown "parts." Yes, Sweetie used to eat it fried or on a sandwich, but he decided he's not too keen on "parts" either and gave it up.

Sandee: It's all about taste.

Adrienne: It's all about taste.

Kid: I used to love Dinty Moore Beef Stew until I ate it recently and I found it too salty to finish.

LL: Lol. OK, I give you credit for making Spam SOUND the greatest in a sandwich award.

Messymimi: This makes me we wonder about how people wring their hands over their pet's food but don't question what protein products are in Spam.

Xero Customer service is available 24/7 for all types of issues related to Xero. We help people to manage their financial Account for future used.