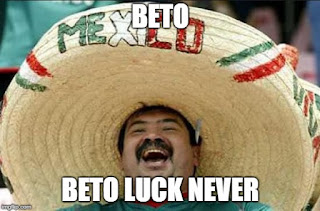 I'm not comforted at how close some of these elections came. I think the tipping point is closer than I think.

Comedy Plus: I saw one of these that read "Beto luck next time," but it din't jive with me. I hope Beto fades into the political sunset.

We need strong leaders now more than ever, i wish more people could see that.

The though that a clown like that was taken seriously (call me Star Lord, er, Beto) amazes me.

Messymimi: I agree. I wish more people could see it too.

Ed Bonderenka: Estupido, aka, Beto, was just one of many. How in the world did an under investigation, idiot, socialist like Gillum come close in Florida and Nelson, the living-skull, do-nothing-ever candidate come close as well? Then there's the gap-toothed, beached whale in Georgia who is waiting for the boxes of uncounted votes. The fix is in if they can pull it off.