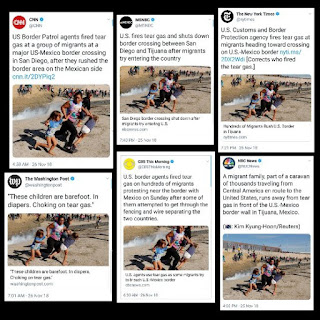 Hoaxed: The ‘Illegal Alien Mom With Barefoot Kids’ Photo Was A Setup – Another Staged #FakeNews Production 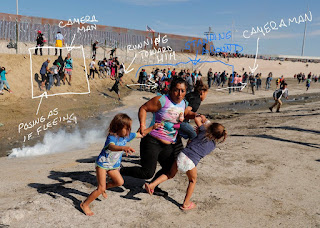 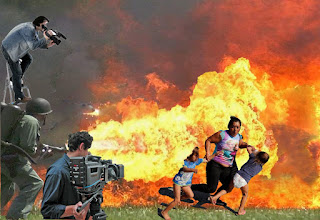 And the liberals just lap it up.
Posted by cube at 7:47 AM

I try so hard not to comment on these issues but I do believe this was a created photo. I have looked intently at the many photos of the thousands marching toward the border and have yet to see children in the mix. I have only seen adult males moving in the crowds. This has nothing to do with my opinions on the issue it has to do with all the hoaxes appearing nationwide.

I knew the minute it was posted it was fake news. I suspect there was a bit of photo shopping involved also.

I also knew that within a day or less my commie/marxist/libtard ex-brother would post it on his Facecrap page with much spittle flecked nutty attached to it. I was right on both counts.

The media, and I use that term lightly, aren't true media anymore. They work on opinion and emotion. Truth has nothing to do with what they do.

I also suspected a bit of fakery since only military age men seem to be in these invasions when the images aren't staged.

Granny Annie: Fake news generated by big liberal media sources in order to sway public opinion is a huge problem. It's imperative that we, as a constitutional democratic republic, have a free press and protect free speech on BOTH sides of the political spectrum.

A case in point: Gadi Schwartz, a journalist delivering a ground report seemed to disagree with the MSNBC narrative of asylum-seeking women and children. Schwartz reported that, although there are some women and children, it's mostly men. He reported that at the food bank, 500-600 men were in line for food. I hope MSNBC doesn't punish Mr. Schwartz for doing his job as a journalist to report what he saw.

The reports that I've seen are 90% male. Photos can only lie up to a point, but the truth will win out in the end. At least I hope it will.

As bad as the illegals trying to foist themselves into our country for freebies, the infringement of a free press and our free speech is even more nefarious.

Adrienne: Anyone with eyes and a functioning brain could see that it was a staged event. This isn't new. CNN especially has been staging fake photo-ops against Israel and helpful to terrorists for years.

You commented: "I also knew that within a day or less my commie/marxist/libtard ex-brother would post it on his Facecrap page with much spittle flecked nutty attached to it. I was right on both counts." I know this is a serious subject, but I couldn't help but laugh at your adjectives. I think there's always one or two in every family.

Can't stress how important it is to retain a free press and free speech for all of our citizens.

Comedy Plus: I agree. Our big media makes up news to mold public opinion in a liberal direction, while leftist social media giants use nefarious methods to shut down the free speech of conservatives. That's not an acceptable situation in a constitutional democratic republic.

Jan: We should learn from the mishaps of Europe. Unchecked immigration from anywhere is not a good idea. I hear that Hillary and John Kerry are in Europe warning about the dangers of unchecked immigration. Why aren't those speeches echoed in the USA???

President Trump is 100% correct (as usual) CNN is an ENEMY of the American people.

Cube, the clinton beast and kerry are gearing up for the 2020 election and saying what they think might get them votes. Remember clinton in the 2016 election promised to increase the importation of moslem savages 500% which would have really been 50,000 percent. If that piece of human excrement thought the nation was obsessed with pedophilia, she'd be promising every household a 5 yr old sex toy.

The fake news is so bad you'd think more people would catch on. They aren't. That's the real problem. Guess they're too stupid or dependent to catch on.

This does not surprise me at all. And that is sad.

LL: CNN is just the tip of the fake news ice berg and, like ice bergs, most of it is below the surface. Look at sources such as Facebook, Google, Twitter. They're all molding public opinion via social media, which is never helpful to conservatives, all the while insisting their policies are fair and impartial. It's fair to say conservatives have many enemies.

Kid: I get your point, they're perennial liars through and through, but what I find interesting is that they aren't saying it in America. What is up being for illegal immigration here and against it in Europe?

Messymimi: It is a sad commentary of our times.

They're not for anything beside themselves.

I remember thinking, when I saw that last night, I wonder if he'll keep his job.

Ed Binderenka: Really? He'll get a statue built in his honor.

Great blog! There is lots of good information, not only me but also everyone can understand it easily
ดูบอลสด
ผลบอลเมื่อคืน
ผลบอลสด