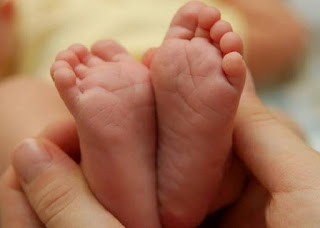 This past week the democrats were praising Virginia Gov. Ralph Northam (D-Va) for his pro-stance on the execrable HB 2491 (the Repeal Act), allowing abortion up until delivery! By championing the killing of live babies, Governor Northam went far beyond the pale in order to please the "enlightened" progressives.

Alas, it wasn't enough for the far left...

Out of nowhere, a yearbook photo appeared and the progressive governor became an unenlightened racist AND, according to a CNN chyron, a (*shudder*) republican, too, 'cause "everyone" knows they're all racists. I haven't seen a retraction yet.

Lest we forget, Northam ran a smear campaign against previous governor Ed Gillespie by tarring him as a genocidal white supremacist and white nationalist.

Calls for Northam's resignation are coming from the left and the right and I believe the news may be announced soon.

Meanwhile, Lt. Gov Justin Fairfax (D) is champing at the bit to move into the governor's mansion because all "good" liberals know that 'racist' trumps 'baby killer' every time.

God help us indeed.
When asked to comment, every major Democrat said they hadn't heard anything about this.
That's a way of saying "no comment" on something you dare not comment on, but are expected to.
Hopefully, they'll be asked again today.

It all just boggles my mind.

Ed Bonderenka: I don't understand democrats. They want to let every Fulano, Zutano y Mengano (Spanish translation of Tom, Dick & Harry) into the country illegally, but are quite willing to go along with legislation that allows the murder American babies. It's an appalling mindset.

Messymimi: I agree. Like I told Ed, it's an appalling mindset.

I understand he's not going to resign. No surprise here.

Have a fabulous day and weekend. ♥

When there is a choice before them, the progs always default to embrace the Satanic option. Nowhere is that more evident than the joy they take in the murder of viable outside of the womb babies/children.