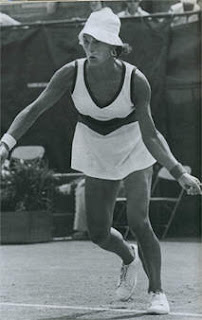 To her credit, Navratilova makes a distinction between those, like Richards, who have had full gender-reassignment surgery and those who merely “identify” as female and take hormones. She thinks there must be standards that bar someone from "having a penis and competing as a woman."

Martina, what did you think would happen when the courts allowed that door to open?

You know what they say about good intentions...

I don't think that men should have to take hormones to identify as female athletes. Men can wake up every morning and decide which of the 31 gender options (officially recognized by the State of NY) that they are - that day - or maybe just that morning. If they want to compete against women, since we're all equal, that should be considered fair.To look at any other way would not be progressive. To be fair, women can do the same thing. One day you're Samantha (sitting to pee), the next day you're Sam (standing to pee) and the day after you're one of those other pronouns that are demanded that we somehow divine or douse, and are expected to use, trying to figure out whether to sit or stand.

I'm hoping LGBTQ groups end up opposing everyone, then everyone can oppose them.
What is wrong with someone objecting to a man putting on a wig and competing against generally less physically formidable opponents? Not a Damn thing.

And I wonder if these idiots know that LGBTQ actually stands for Let's Get Behind Trump Quickly !

They never think about all of the unintended consequences.

I remember the East German women swimmers of earlier competitions...built like tanks and full of testosterone. Americans were outraged

LL: Your comment reminds me of Lord Byron's quote, "Fools are my theme, let satire be my song." Too bad some of them don't get it.

Woodsterman (Odie): Tell us what you really think 😉

Kid: Lol. Careful when you tell the LGBTQ crowd what that really means. Stiletto heels are sharp.

Messymimi: What could go wrong, right?

Jan: I remember the big stink over the East Germans and their hormones. It was cheating, pure and simple. Without an even playing field, why bother with competition at all. Just give everyone a participation trophy and go out for ice cream.