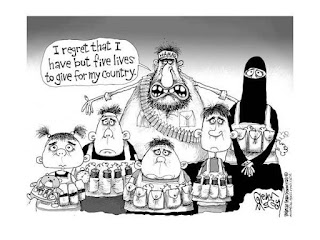 Hmmmm, let me see, sharia activist father, little brother who brings a "clock" that just happens to look like a bomb and sound like a bomb, and now, big sister who admits she was suspended from school for an bomb threat three years ago. Of course, big sis insists she was unfairly accused by the "stupid same district", but her parents refuse to allow the details of the suspension to be released to the public.

They'd have us believe they're just a poor, persecuted family.

They really do think we're stupid and if we continue to believe that moslems aren't a threat and just want to live peacefully among us, they're right.

Everything they do is calculated and probably with help from the dems. It's all very calculated. I will not submit.

Absolutely. Theirs is a culture of lies and they'll say anything it takes to gain access to government funding and win settlements on frivolous lawsuits all the while laughing at the silly dimmihs that allow it.

Also calculated was the little five-year old girl who was able to escape security during the Pope's motorcade in DC and approach the Pope. She just happened to be wearing a t-shirt that read, "Papa Rescata DAPA" which translates into Papa rescue DAPA (Deferred Action for Parents of Americans). That was no accident.

I'm avoiding the news until the Pope goes away.

homicide bombs are just part of their culture, cube.

DaBlade: Yeah, what a culture.

This whole clock maker kid story has smelled from the start. Can we spell scripted set up.

Jan: It really has stunk from the beginning. The $hit-eating grin the little moron had on his face gave it away. If you're suspended from school the last thing you do is smile, at least that's how it was at my house. We feared the wrath of our parents if we pulled a stunt like that, but then we weren't young terrorists-in-training.

I hope the whole thing blows up in their faces... pun intended.

Keep your eyes open always is a good lesson from this.

"America" is not going to wake up until it is pretty much one of the shithole countries of the EU that can't seems to kiss enough moslem ass to satisfy itself.

Messymimi: My mother was right! She lectured us about that when we were kids... come to think of it, she still does ;)

Kid: Just heard that in some German cities the streets are full of these refugees, mostly men, and German women are being warned to cover up! This is unreal. If the Pope is going to be scolding us to take in refugees, first, you open the doors of the Vatican and let them stay with you, second, we don't take orders from the Pope.

Americans won't let go of the 2nd amendment. If we do, we're doomed. It's the only thing that separates us from the animals.

1st off: Agree 100%. If you talk to the Pope, tell him for me, I have no intention of embracing moslem vermin unless the result is I suffocate them.
The Pope is as bad as obama these days. I can't remember the last time I heard something religion based from the guy vs the leftie communist political crap he's been spewing. And Capitalism is a problem? Where the * does he think the money comes from that is being re-directed to "the poor". The concept is so simple, we must conclude that anyone who doesn't get it is certifiably insane. And so I have.

Also, In Sweden, people's summer homes (at least) are being Confiscated and given to the moslem vermin invaders.

2nd Amendment. Damn straight. It is the Only thing that sits between us and this unbelievable nonsense.

I will never accept moslem vermin as anything but savages who need to be exterminated. islam is a cancer upon the Earth.