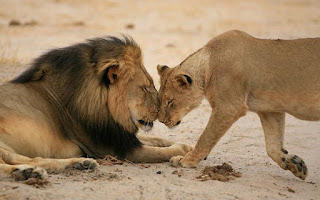 First, I am not against hunters or hunting.

Second, I am appalled at the death of this magnificent lion, especially since there is no sport at all involved during what looks like a canned hunt.

That said, I am shocked that the death and organ harvesting of unborn human babies at the hands of the federally funded Planned Parenthood program is being soft-pedaled by the media.

Have our moral compasses gone so awry that we, as a society, can't see that both cases elicit moral outrage, one more than the other?

Apparently, or OBVIOUSLY?, it's far more sad that a lion died (which we are all sad about, of course, sincerely) than the fact that PP is killing babies and dismembering them......and profiting from it.
What a terrible term for our great country founded on the importance of LIFE. Peoples' lives coming first....or do I really need to add that? I guess so.

Good for Senator Rubio, It won't be long before we hear about the war on women that those who want to defund PP are waging. The country has become that coarsened.

Of course, the outcry over this PP evil will not get nearly the play as the death of Cecil.

Jan: I've heard from some millennials that those late-term abortion babies weren't wanted anyway and it doesn't matter what happens to them. Yes, the country has become that coarsened.

The comparisons are stark and obvious. The divide that separates us has become a chasm. And the monsters are in charge.

DaBlade: In my lifetime, I've never seen the divide be so great. So much for a transparent trans-racial presidency.

Always On Watch: And there are judges busy at work to prevent the airing of these videos. I know they're hard to watch, but I hope that the left's attempt to squash the videos doesn't make the issue die away.