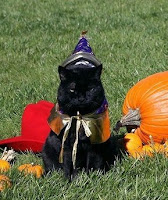 Had she lived, this kitty wouldn't have been summarily dumped when the Bushes left the White House... unlike poor Socks Clinton.
Posted by cube at 7:47 PM

only a cat could have such immaculate timing

I doubt that for all their shortcomings, the Bushes would've dumped a cat like the Clintons did.

I have a friend who had a twenty-two year old cat. His parents got the cat (kitten) a mere two months after his birth, so they were virtually the same age.

That cat was completely deaf and mostly blind, but still ambulated quite well because she knew where everything in the house and yard was located.

She could no longer meow, but made a noise that for the life of me sounded like a small child yelling "help!"

That cat would freak me out every time she yelled! LOL!

gifted typists: There are such things as gifted cats ;-)

steve harkonnen: 18 years is a long time. We had Baldy for 16 years. She was an awesome cat.

brooke: Yeah, cat dumping is one charge the libs can't lay on the Bushes.

It's funny that you would mention the cat with the funny meow. We knew a cat that hung out in our neighborhood whose meow sounded like it was saying "robert". Of course, we never knew his real name, but he was known as Robert at our house. I watched the cat I mentioned above, Baldy, chase him out of our yard on more than one occasion. Baldy didn't like Robert much.

That was good timing on Indias part, but such a sad loss for the Bush family. It's also unforgivable of the Clintons to dump their cat!
The two kittens we've just acquired, have a long way to go yet, and they're going to have to get along with the magpies we're feeding........

gecko: Keeping the cat in the basement under the care of an underling during their stay in the White House and then dumping him with Betty (the secretary that would arrange Monica Lewinsky's visits) after they left the WH is
just another in a long line of unforgivable things in the lives
of the Clintons.

I hope those magpies are quick ;-)

18 years, wow. I remember when the Clinton's dumped the cat.

chuck: Yeah, poor Socks was just a prop to curry favor with the American people. So was Buddy, the dog.

brooke: I just remembered a story along the lines of yours. I stepped into a friend's house and their blind poodle stuck its head up from behind the couch suddenly and scared the devil out of me. Its eyes were completely white. Yikes! Talk about a bad first impression.

brooke: I just remembered a story along the lines of yours. I stepped into a friend's house and their blind poodle stuck its head up from behind the couch suddenly and scared the devil out of me. Its eyes were completely white. Yikes! Talk about a bad first impression.

Islamists are now mocking the death of Bush's cat. Seriously.

Wow 18 years. I love my cat but I don't think he'll live for that long. He's too much of a diva to get old.