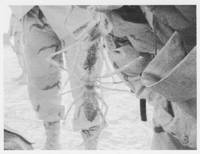 In an article from World Net Daily, Al-Sumide'i continued: "The first miracle that occurred in Fallujah took the form of spiders that appeared in the city – each spider larger than this chair, or about the size of this chair. The American soldiers [above] holding the legs of this spider, and I too, in one of the Friday sermons, held up a spider, with all its magnitude, in front of the satellite channels and in front of the world. This spider also had thin black hair. If this hair touches the human body, within a short period of time the body becomes black or blue, and then there is an explosion in the blood cells in the human body - and the person dies."

A closer examination of the facts surrounding these "claims" of giant spider foot soldiers for Allah proves that Baghdad Bob wasn't the only delusional Iraqi in town.

A thorough explanation of this urban legend can be found at www.snopes.com . Just ask the search engine for camel spiders.

It is worth the read.


thanks, his article is very helpful

This article will hopefully help and benefit us all


This article will hopefully help and benefit us all

the article is very petrifying, hopefully it can be useful and an important lesson.