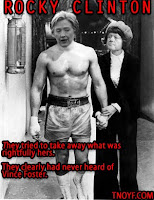 IMO the short answer is no.

I agree with you. The Clintons have seemed to thrive on embarrassing scandals that would have put most of us in a fetal position in a dark closet. Nothing seems to stick for long.

That darn vast right wing conspiracy and all.

I love Rush Limbaugh's comment about Hillary's chances during the 2008 election and they apply now. Basically he said he'd believe Hill was out when he saw her red shoes sticking out of the bottom of the fallen house.

I tend to agree with him.

I think Hill is just getting out of the media's way for now, but you never know what's going on in the background.

You underestimate HillBill at your own risk.

I find that the photoshopped image of a topless hillary puts me in a fetal position in a dark closet.

One of the most damning assessments of this is that the Obama administration is looking amateurish from all of this. I think she gets the brunt of this.

Anonymous: You are not alone.

Chuck: I think this is a silver bullet aimed at Hillary, but I also think this old werewolf isn't about to take the shot for long. She's going to bide her time and then it will be resurrection time because her followers need her.

Trying to make something stick to the Clintons is like trying to nail Jell-o to the wall.

Brooke: Very apt phrase. I'm not counting Hill out just yet either. I am keeping my eye on her, bad hairstyle or not.

I'm not sure if it'll be her waterloo but, if she does decide to actually get out of active politics, I think we'll see it in BILL...he's been doing things that politicos are saying is padding her chances...now that she's said NO to 2012 (and, let's face it, once you've said that, it's hard to go back in that business...), it'll be interesting to see if HIS ego is curtailed, if he was fulfilling promises to HER to get her elected or still feeding his enormous ego by the public things he's been doing the last few years.

Z: If BO's star continues to falter, there may very well be a groundswell movement to resurrect Hillary. Once the wikileaks furor dies down, she could pick up the mantle in 2012... for her followers, of course, not for herself. She would be portrayed as a self-less fighter against the evil forces of the right.

this is picking up steam Cube..visa and mastercard were hacked.......

Bill and Hillary are very calculating people so I doubt it, but ya never know.

Basically he said he'd believe Hill was out when he saw her red shoes sticking out of the bottom of the fallen house.

I think she will run and quite possibly win. Bill will be her ace in the hole representing the sentimentality ticket and President Obama's downfall will only serve to feed the good old days theme.
"I find that the photoshopped image of a topless hillary puts me in a fetal position in a dark closet." I'm pretty sure that's a new one for rule 34 ;-)