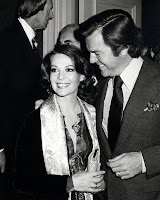 Could "credible sources" be trying to cash in or get their 15 minutes of fame?

Honestly, I suspected Wagner way back when only because he was the spouse. I do believe the investigation was sub par, but for this captain to come along 30 years later and have "new" information, is not credible to me.

Me, I don't believe a woman would sail off in a dinghy wearing a nightgown, socks, and a down jacket.

Cube - This has got to be insanity
in its purest form. Of course CNN will cover every detail. :)
~~~

By the way - Cube - if you get HBO check out Piers Morgan tonight at
9 pm CT.

He will be interviewing the Shatman.

Cube - You might have if you were married to R. Wagner.


He was really hot back then.

There was plenty of suspicion of Wagner back when Natalie Wood died.

Now, it's 30 years later -- 30 years too late for any credible investigation, IMO.

Sue Hanes: Thanks for the heads up, but I don't have HBO. I do like the way you've taken up calling Shatner the Shatman. It makes you sound Trek-savvy.

And yes, Wagner was hot back in the day... so was the Shatman.

Always On Watch: I remember. I don't think any productive will turn up now after 30 years.

Goodness, it feels as though those 30 years just flew by.

They are saying that Wagner is not a suspect. This was such a sad event. She was such a great actress. My dad has believed firmly ever since that happened that Wagner did it.

Christopher Walkin was also there that night... didn't know that.

If the captain saw something, why is he only saying it now? Makes no sense to me.

Silly Rabbit: I always suspect the spouse because they are the most likely candidate.

I still don't believe a woman would sail off in a nightgown, socks, and a down jacket.

There is something off here. I don't know what is is, but something is off.

Cube - I will watch the interview and let you know how it goes.

I honestly never believed her death was an accident.

Natalie Wood was a personal favorite of mine.


I hope there was no foul play here because so were R. Wagner and especially C. Walken.

I was surprised to see this in the news again.

Cube - I am sorry that you were not able to see Piers Morgan interview The Shatman. :)


Piers Morgan's show is in depth and William Shatner is obviously also.


He tried to offer insight into what is happening to our country today. I missed parts of it but they do repeats and I may be able to catch it later.

I'm with AOW. I don't think they can get any result from re-opening this case.

And an aside: What is it with rich leftists drowning women?

here in LA, the POlice are saying Wagner isn't a suspect. So who? There were only those few on board and Wood was desperately afraid of water, according to the stories back then, too........
Walken was supposedly sleeping......

we'll never know what happened, will we.