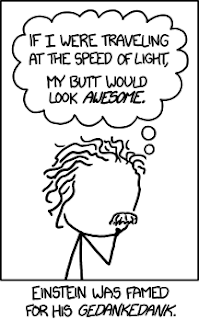 We live and learn.


Cube - I have to admit that I totally don't get this one.
But you scientists do. Right?

Sue Hanes: I wish I were a scientist, but all I have is a college degree in biology.

Einstein was known for his thought experiments. Gedanken is the German word for thought.

The part about his butt has to do with the one facet of his special relativity theory which refers to how moving objects shorten with increasing speed.

Gedankedank is a scientifically humorous joke having to do with his theories and his butt.

What do they say about jokes... if you have to explain them they're no longer funny.

Leticia: I certainly admire his early work, but I think he got a little batty later in life.