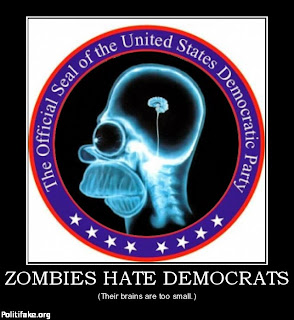 US Economy Slowed To 0.1 Percent Growth Rate In Q1

US Astronauts Should Use Trampolines To Get Into Space, Russian Official Says

Yeah people, keep voting in those incompetent democrats... there's no telling how low we can go.

Yep, we are in deep dodo for sure. They don't care though. They have their agenda.

Yeah, they have their free stuff. That's all they care about. Screw the rest of us.

A trampoline... now, that is funny.

Love that picture. They hate the Democrats because their is nothing for them to chow down on. No brain, no zombie food.

Robin: Funny on one level, but not so funny to the astronauts who are dependent on the Russians... we never should've cut NASA's funding.

Leticia: We know our zombie lore ;-)

If the people who are keeping them in office would stop being defensive about them long enough to open their eyes, they would see we are being destroyed. But they can't see a world where they could possibly be wrong about something. And leader man eats it up.

Cube - I like the idea of astronauts using trampolines to get into space. Sure would be cheaper.

Silly Rabbit: I agree. Admitting they've been wrong is anathema to their core selves. They'll sweep everything under the rug and the decline continues.

Sue Hanes: It don't think it was meant to be funny, but a sinister way of Russia (USSR) telling us we have no power over their expansionist ways. They might as well have told us to use a big rubber band. Or maybe bouncing them off Joan Rivers' tight face skin. It might be humorous if there were no attendent deadly consequences for the free people of the world.