I Love Me This Picture 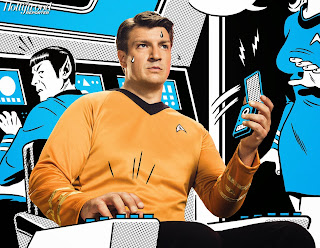 Not a clue here. I see Spock, but don't get it.

I find Fillion to be quite handsome and seeing him in the iconic Captain Kirk pose is very exciting because Captain Kirk was my first crush.

Lady Lilith: And Firefly fans, too.

My favorite show ... "Firefly". I took the test to see which character I was and I was Mal. You can still catch him on "Castle".

OOPS ... You told Sandee that above. Well I guess we think alike.