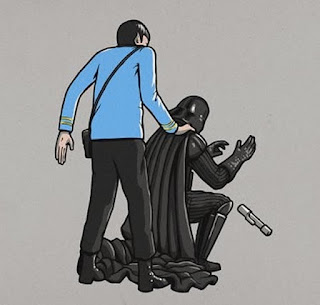 If you've known me long enough, you know that I'm a big sci-fi fan.

All You Need To Know About The New Star Wars Movie

That is a very misleading headline. You won't get any real reviews from the mainstream media.

And that is the most honest review you're going to get.

Darth Vader would have boxed Spock's pointy ears... BUT since Star Wars took place a long time ago in a far-away galaxy, I don't see the conflict since Star Trek takes place in the future in this galaxy.

My kids are huge sci fi fans and have never complained about any of the movies. They are just grateful to have something to watch that is not of this world.

Jan: I'm not saying the movies aren't worth watching, but I am saying I want something better than the more recent crop from both franchises. I admit that what I like can be considered arguable and worth discussion and I'm ready and able to discuss my point of view with any other fan. Bring on the forums ;)

It's my opinion that the sci-fi genre CAN make really good movies and I, as a fan, want to see it happen. Please, make it so.

I'm too old to care anymore. I've not seen any of those bad movies you've talked about here. You can't go back is my philosophy. Once you've done something you've done it and you're not going to make something better.

The original is (almost) always the best. Make what you want of that idea.

I like Chris Pine as Kirk. Just watched the new "Beyond" trailer and will see that one when it comes out. I can wait on the Star Wars one.

As for me, I always loved " Star Trek. Unfortunately for some reason, Star Wars never excited me. Dr. Spock was always the interesting individual character I liked.

Sandee: I'm not particularly fond of remakes myself, but some of these movies are sequels or prequels, and if good, they add to the entire mythos of the franchise. I'm very curious about this new Star Wars movie, which is a sequel, especially when they bring back some beloved characters to help out. This is something Star Trek should've used more efficient.

Messymimi: I'm with you on the original being the best, but I hope that one day we figure out how we can outdo ourselves. I'm hopeful that Shakespeare wasn't completely accurate when he said there was nothing new under the sun.

DaBlade: Me, I'm more of a Star Trek fan. Kirk was one of my first crushes... and I'm not even green, go figure. But I'm still not sold on the new Trek. "Into The Darkness" (which I haven't even watched in its entirety) was on cable the other night. I caught a few minutes and the love scenes between Uhura and Spock were disturbing. I'm trying to wrap my mind around the new prime universe but, more and more, it's not a place I like as much as the old universe. It's still better than a Jennifer Aniston romantic commedy, 'cause I'd rather pull out my own teeth than do that.

Paul Pietranglelo: Live long and proper, Paul. I hear ya!

Better you hear it from me, it's Mister Spock. Dr. Spock was a pediatrician with a practice that in time became questionable.

Sue Hanes: I've been hearing great things about "The Force Awakens" myself. It would be fantastic if it truly was as good as the original trilogy. I never care what the critics say, I rate movies myself, and this one will be no different.