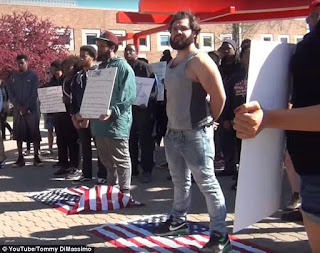 For the people praising the guy who went after Trump on stage, here's another shot of him for you, just so you know exactly what you're supporting.

Stupid is as stupid does.


[Hat tip to Andrew May, Justin Adams, & Conservatives Against Obama's Liberal Agenda.]
Posted by cube at 9:47 AM

Exile him to Syria...

LL: Excellent idea. He'll be able to protest all he wants until he gets his silly socialist head lopped off.

North Korea might be a good place to sent him too.

I'd like to bitch slap him for standing on my flag too. He's a POS, and a hood rat.

Sandee: I agree. These "protesters" bleat and whine about freedom of speech, but they don't know the meaning of the phrase.

They make me both scared and sad for my country.

If you rush a presidential candidate... anything goes. He is very lucky not to have additional orifices.

what a fine mess we are in Cube!! HAPPY ST PATTYS DAY my friend! xoxoxox

Cube - Three cheers for anyone rushing the stage to stop Trump. I can't see what voters see in him.

Messymimi: The current state of affairs in our country scares me as well.

WomanHonorThyself: We are in a fine mess.

Sue Hanes: So you approve of a turd who stomps on the American flag and tries to stop the free speech rights of a candidate running for office... that says a lot about you, Sue.

Kid: Amen to that.