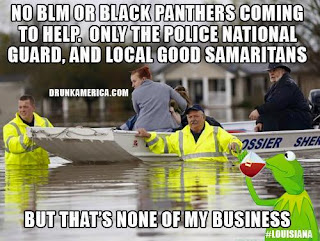 Unfortunately none of that surprises me. At least Bush flew over and on the advice of everyone except the media he didn't land.

obama did jack nothing for Sandy too. And the Media forgot how to report again. and again.. and again..

The mainstream media will be apologists for Barack and Hillary, no matter what and will demonize Trump. That's just how it is.

The random helpers are called the Cajun Navy. They, police, sheriff's deputies, & the National Guard are our heroes.

I think many can see what the democratic party has turned in to. I don't think many are wearing the blinders anymore. The media though that will never change. It is what it is and if people are expecting the truth from the media then they are the losers.

Your title says it all. "Who Cares"

Jan: W should've fought back more than he did. That was his hamartia. Trump doesn't have that fatal flaw.

Kid: I remember him walking the Jersey shore with Cristie. A whole heck of a lotta good that did.

LL: You're right, but we have to get to the point where we don't accept it anymore. We have to fight back.

Messimimi: Well, they're my heroes, too.

Granny Annie: I knew someone would pick up on that.