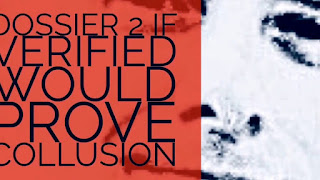 Inside The Shadowy Intelligence Firm Behind The Trump Dossier

Somebody is behind the leaks...
Posted by cube at 3:47 PM

I believe that fairy tale was bought and paid for. I would tend to include mccain, the clinton's, soros in the $ contributors.

Messymimi: There is always someone in the shadows and sometimes it's for own good. I understand that. I'd prefer that the brunt of our country's business be done in the sunlight only because I don't trust half of these politicians.

Kid: I don't see the Clintons contributing to anything but the Clinton Foundation. McCain is bitter enough to fund something nefarious, but I don't think he's all that rich. Soros is my best bet, because he has the most money and has a fetid, evil, black heart.

My money is on the same person. There are a lot of evil folks out there that want to cause the president harm. I do think much of this will destroy the democratic party though. It's in pretty poor shape now.

Sandee: It is definitely flying back into democrat faces isn't it? In terms of special elections, what is it now? Despite all the hollywood money, four to NOTHING. I'm just thinking how great it is to have a President that loves his country and his little boy who thought taking a picture of a Marine was a cool thing.

My thinking was clinton campaign money. Would they do something that dirty ? Yes.
Yes, they would not spend their own.

And mcStain recently said obama was a better president. yea 18 trillion spent on nothing in America.

Kid: I don't think the clintons would give one penny of their ill-gotten wealth to do something like this. I don't think McCain has that kind of money, but if he came out and said obama was a better president than Trump, then he could very well be our traitor using the McCain Foundation money. Then there's Soros. Mr. Moneybags who hates America. I hate all of them, but hating is one thing, proving guilt in court is another. Maybe time will tell who the rat really is.

I put out my opinions and certainly won't argue with you. Who Knows.
I will recognize we have some serious evil on the left. Buda-Bing.

Kid: Yes, that we can agree on the Clinton, McCain, Soros foundations, et al, make my blood
boil, but what we think is far from what we can prove in a court of law. We need to take them down the legal way.

Prove in a court of law? I'm still waiting for even a sniff of investigation let alone an indictment !

Kid: I don't see the Clintons contributing to anything but the Clinton Foundation. McCain is bitter enough to fund something nefarious, but I don't think he's all that rich. Soros is my best bet, because he has the most money and has a fetid, evil, black heart.

goldenslot is another service that should be played. With an easy way to play Play online through the webpage immediately. โกลเด้นสล็อต is open for both online slots games. And online casino games Packed with more than 350 quality games.

Amazing issues here. I am very glad to see your post. Thanks so much and I’m taking a look forward to contact you.

Great blog right here! Additionally your site a lot up very fast! What host are you the use of? Can I am getting your associate hyperlink in your host? I wish my web site loaded up as fast as yours 오피

"Impressive Thanks for the post! Carry on, don’t stop! Thanks for any other great article. The place else could anybody get that kind of info in such a perfect means of writing?
I have a presentation subsequent week, and I’m at the search for such info."

"First off I want to say excellent blog! I had a quick question in which I'd like
to ask if you don't mind. I was interested to know how you center yourself and clear your mind prior to writing.
I have had a tough time clearing my thoughts in getting my thoughts out there.
I do enjoy writing however it just seems like the f

First 10 to 15 minutes are generally wasted simply just trying to figure out how to begin. Any ideas or hints?
Thank you 스포츠마사지!"