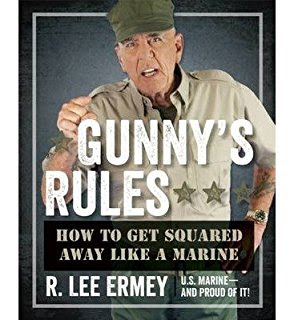 He lived by a code, he was faithful to that standard of conduct and remained faithful throughout his life. His memory is his benediction.

May he rest in peace. He's earned it.

LL: I think Gunny would've been pleased with that.

RIP R.Lee Ermey. I suspect Drill Instructor Extraordinaire. I remember reading he and his colleagues would sit around brain storming insults for the new pleebs.

And as Ronald Reagan said "If you're a Marine or have been a Marine, you never have to wonder if you made a difference."

I loved him in all his shows and commercials and now, after reading the obituary, I love him even more.

Kid: Stanley Kubrik, the director of "Full Metal Jacket" said that Gunny came up with 150 pages of insults for the recruits and 50% of Ermey's dialogue in the film was his own. How cool is that?

Granny Annie: What did you read? That after the military he bought an old brothel in Okinawa, or that he ran from the law for some black market activity and ended up in the Philippines? It
didn't change my high opinion of him.

I have also heard that R Lee was there to give the intended actor to play the part some guidance on how to be a Drill Instructor. That scene was supposed to be a milk run but was cut into the movie and the actor replaced by R Lee. Cool. Hard to beat the real thing.

Kid: He was a real man in every which way you want to look at it. Tough, but loving when it counted. He will be missed.