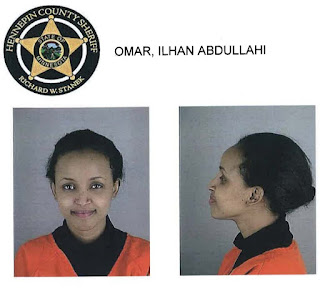 During a speech to CAIR, Ilhan Omar referred to the heinous attacks of 9/11 as, "some people did something."

In fact, Omar claims that moslems are being "terrorized" by the nation's response to 9/11.

Here's some feedback from others:

"First Member of Congress to ever describe terrorists who killed thousands of Americans on 9/11 as “some people who did something”. Rep. Dan Crenshaw, R-Texas.

"I am questioning how any American, let alone a United States Congresswoman, could downplay the 9/11 attacks," Brian Kilmeade, Fox News.

Save your taqqiya (lies) for some lefty idiot who falls for it. I would enjoy putting on a pair of surgical gloves first, then grabbing you by the fugly azzhat thing on her head and dragging your somalian azz out of the Halls of Congress, where you don't belong, and slapping it onto the nearest flight to your s**t-hole village, where you do belong.

If anybody complains about my feedback, well, ... some blogger said some things.

We've got some new idiots walking the halls don't we. Scary.

First - how did you find a pic of her without a rag on her head? I looked and looked suspecting that she wears the rag to cover very crappy hair and a goofy forehead (I was right.) She knows she looks much better with all her fancy (no doubt expensive) rags.

Second - a few "bellwether" commies I stalk on Facecrap are suddenly very silent about this traitorous bitch, as well as commie Empty Cortex. That's how the commies roll. First they embrace these creeps, and then when the creeps get too publicly creepy, they just sort of ignore them.

Adrienne: It's her mugshot. I figured they wouldn't let her get away with wearing her rags.

And, yes, the commies don't like admitting that maybe, just maybe, they were wrong about anything, much less these three destructive fools.

@Adrienne
1. A certain Baltimoron (currently in exile) has used the term "weird garlic bulb-shaped heads" in his writing on Rep. Omar's people. A luminous phrase that fairly leaps off of the page.
2. The Left doesn't merely embrace these persons, it plays an active role in creating them. David Cole compares Ilhan Omar (and her ilk) to the Golem of Jewish legend. He has a point. "Fargo Hitler" indeed.
https://www.takimag.com/article/stop-with-the-golems-already/

The media is gonna laster this POSs face all over their website pages for the duration, which is another reason I like whatfinger.com - No pics of the vermin.

Omar is a scoundrel

I'll take that picture to the range.

It’s a sad commentary on what is going on in the minds of so many. Scary and sad.