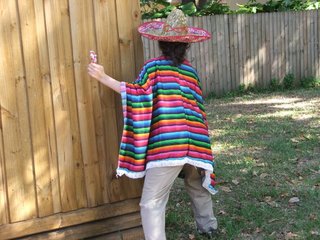 From the American Thinker:

Illegal Injures State Rep In Mass, Laughs That 'Nothing Is Going To Happen To Me'

This paragraph caught my eye:

"State Rep. Mike Moran of Brighton was rear-ended by a suspected illegal immigrant this week. The suspect was wearing a Mexican costume at the time of the crash where he slammed into Moran at 60 mph."

First, just what is a Mexican costume and why would someone walk around in one?

Second, I wonder if actually being the victim of an illegal will change Rep. Moran's view on illegal immigration reform?

Next thing you know he'll be asking us to insure uninsured illegals so that they can be protected too.

Governor Deval Patrick, even as he decried partisanship in Washington, said today that Republican opposition to President Obama’s agenda has become so obstinate that it “is almost at the level of sedition.”

So he's against the freedom of speech of Americans while he protects the "rights" of illegals?

Ananda Girl: Really, why stop at free health care. Let's all pay for auto and home insurance for illegals while we're at it. What's one more tax?

Chuck: Deval Patrick is cut from the same cloth as BO. 'Sticking it to the man' is such an overriding theme in their lives that it doesn't register that
that they are now in the position of 'the man.'

I'm still stuck on the "mexican costume" thing. I'm surprised the paper reported that, as it smacks of "racism"

I can't tell but are those little maracas in the mexican's hand?