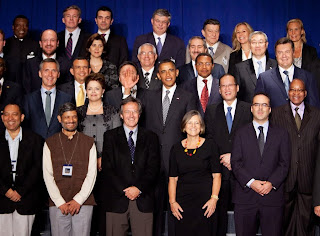 Just when you think THE EGO will find its limit...
Posted by cube at 8:47 PM

When i saw this picture this morning I thought it was a clever photoshop. It isn't. He did this. How proud we all are.

He is simply the only one in the picture

I also thought it was photoshopped when I first saw it. How rude!

Jan: The picture I first saw was captioned as not being photoshopped. I checked several other sources before I posted it.

Can you imagine how the poor man must feel having Obama's limp-wristed hand covering his entire
face. They should've done a re-shoot for posterity.

Chuck: In BO's mind, he's the only one that matters.

Sue Hanes: It's not the wave I have a problem with, it's the wave's placement. It shows little to no concern over those around you.

Brooke: I think it's more ego... the rules don't apply to me because I so ruled they don't.

Silly Rabbit: It is rude and not one bit endearing.

Right in the center,where he thinks he belongs...

But Cube, look at the picture.

Where else could he have put his hand, except right in the face of the Mongolian Ambassador.

What else are photo ops for?

dude behind him SO should have given him bunny ears. It would totally fit. Photoshop, anyone?