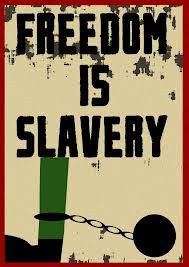 "George Orwell's Nineteen Eighty-Four was published on this date in 1949 (books by this author). Nineteen Eighty-Four begins with this famous line: "It was a bright cold day in April, and the clocks were striking thirteen." Orwell wrote most of the novel on the island of Jura in the Scottish Hebrides; grieving the loss of his wife and overwhelmed with all the demands on his time that arose from the success of Animal Farm (1945), he retreated there with his son. The weather was bad, and so he stayed inside and wrote. He kept on with the book even as he became more and more ill with tuberculosis. He died in 1950, less than a year after the book was published."

Orwell said: On the whole, human beings want to be good — but not too good, and not quite all the time.

His books have held up well through the years.

these are Orwellian times my friend!!:)

I wonder what George Orwell would have to say -- in the 21st Century.

Jan: Yes, they have. I think his books are even more relevant now than when I read them so many years ago. It's why I recommended them to my daughters.

Always On Watch: A question I would love to see answered myself.