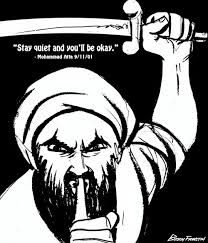 Children Of 8 Are 'Racist' If They Miss Islam Trip: School's Threatening Letter To Parents Is Met With Outrage

Can you believe this insanity?

Where is a giant middle finger when you need it.

Seems like any time you don't want to do something that "authority" wants you to do... you must be a racist. I am so sick and tired of that card being pulled any time someone disagrees with what is being shoved down their throat. Maybe they just don't LIKE it.

I totally agree. I'm not a racist or a homophobe, but because I don't LIKE the stuff that I'm made to feel as though I'd better agree to, I may be labeled as one.

It's an utterly deplorable tactic, but it seems to be effective.

I know for a fact that parents and students who don't participate in Islamophilic activities held in the public schools in Northern Virginia are vilified.

Worse, these parents and students remain silent! Fear, I suppose.

Wow. I pulled my 3 boys from public schools over a similar multicultural "religious" field trip over a decade ago. It cost me $70,000 in cumulative parochial tuition cost but I don't regret it.

Correct me if I'm wrong, but isn't Islam a religion and not a race? This is deplorable.

DaBlade: I hear ya. We spent more than that keeping our girls out of public schools but it was a different situation; an equally bad one.

Jan: You're right. Deplorable is a good word for this.

Mooselimbs ought to crawl back to the Middle East.

WomanHonerThyself: I can't either. Up is down and black is white... the world HAS gone topsy turvy.

Woodsterman (Odie): From your keyboard to God's ears.

My classes are so politically incorrect that they make heads spin. **smile**

Interesting that DaBlade mentioned over a decade ago.

Always On Watch: Too bad you didn't teach my little ones.

Sue Hanes: I, too, think the parents should have a voice in the matter.

If any of you were paying attention to the full story you would know that the parents complaints got the whole deal cancelled and almost got the administrator canned.

She wrote all parents an apology.

Duckys here: Thank God Ducky got here in time to inform us.

If you are Christian here in the U.S. you'd better not have anything at school saying so. Why Islam? The religion of hate and intolerance. I don't get it either.

If I had school age kids they would be home schooled. Period.

Sandee: I'm in agreement about schools not giving in to islam. On the other hand, home schooling is hard to do and I give kudos to everyone doing it.

I have an idea... why don't we just shun islam in our schools.