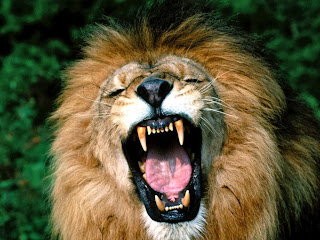 It is a rare event for a male lion to kill a female, but they are wild animals in cages... maybe it was a psychotic break.

Then again, is a zoo any less dangerous that being out in the wild with trophy hunters like this woman who will shoot anything that moves... 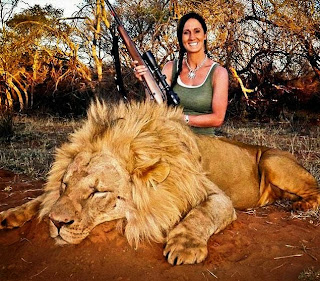 The lion killing the lioness... bizarre. I am so glad I didn't see that (not that I live in Dallas). But still. And I didn't even read about the trophy hunter. I have zero respect for those folks.

Very weird. It has always seemed to me than the lionesses ruled the territory when they were put together.

Anything can happen to those locked in cages.

I grew up hunting, our family lived on the meat. Bur for me, there was never any joy, any glee, at that critical moment. I have no pictures of me next to a kill, nor do I wish to have any. I was happy we got the meat, we needed it, but not that a life was taken, to do it. For me me, life is sacred, all life. And, I have seen too much of it wasted, human and animal. Taking the life of an animal, where there is no need, for a head, a rack, to me, is no sport. Just me.

As for the mail lion in the cage killing the female, a cage is not, a normal environment. And I doubt, that lion had a normal, upbringing, for a lion to be, normal.

Robin: I agree with you about not wanting to watch the scene of the kill, but, as someone with a biology degree, I'm conflicted about people who shoot animals to cull the herd. Sometimes it's necessary.

Jan: You're right. It's very weird. In fact, one of the zookeepers in the article said he'd worked in zoos for 35 years and he never saw this happen before. Males will kill males, but they don't usually kill females.

Woodsterman (Odie): That's true... look at prisons.
There are some zoos that take great expense to make their habitats as normal as possible in captivity. Busch Gardens, here in Tampa, has done so over the years.

I wonder, wouldn't that be better than risking getting shot at by the Lioness Hunter?

Anonymous (BW): I understand your position. I'm an avid shooter, but I wouldn't shoot an animal I wouldn't eat. That excludes everything but a wild hog/boar or a turkey. That's just me and my tastes.

Who knows about the caging causing the incident... they used to be in cages, but now their habitats are the most humane that have ever been.

Two males and one female in the enclosure. Would have made sense had one male killed the other. At least I know from NatGeoWild that this happens with Grizzlies. But why would one male kill the only lioness? Sounds like he is suffering from a case of limp paw.

There was an event at the National Zoo in Washington, D.C., too: a zebra attacked a zookeeper.

Cube - I hate to see animals killed for sport. And I also get a guilty feeling when I go to a zoo - seeng those beautiful animals caged just so we can get a look at them.

We will never know...could have been a mercy killing.

Always On Watch: cue Hitchcock... lol. Yeah, maybe we should. Zebras aren't known to attack zookeepers. What is going on?

Sue Hanes: Some zoos are as humane as possible for some animals that can't be released into the wild. At Busch Gardens, here in Tampa, the large animals have extensive habitats and are cared for as humanely as possible.

Granny Annie: You're right, we won't ever know what happened.

When one conceives the issue at hand, i have to agree with your endings. You intelligibly show cognition about this topic and i have much to learn after reading
your post.Lot's of greetings and i will come back for any further updates.