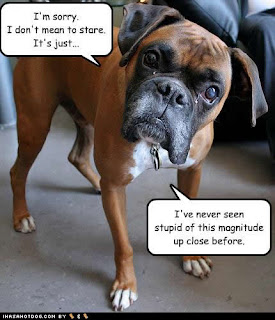 Booze and guns are never a good mix and the lesson is learned fatally. Clearing out the gene pool anyone? BTW, take part in my poll, 2nd post down.

Sad, so sad. Actually, the issue wasn't even so much the booze, except it definitely obliterated and good sense. They guy didn't understand the basic rules of gun safety.

Rules I follow, which are pretty standard, and I taught my daughter, my wife, and are really just common sense.

Not in any particular order.

Rule. Always treat a gun as if it is loaded. Even if you think you know, it is not.

Rule. Never point a gun at anything you don't actually intend to shoot, and if alive, kill. And, always point a gun at a safe spot so no harm would be done if it did go off, even if dry firing the weapon.

Rule. Never put your finger on the trigger until you are lined up with a target you actually intend to shoot, and if alive, kill.

Rule. Never assume the safety is on. Always treat a gun as if it has no safety, or doesn't work.

Rule. Repeat the above, until knowing them is as natural to you as blinking your eyes.

A Darwin Award winner for sure.

This is a sad thing, but I want to laugh that his name was Looney... for the obvious reason. Sigh.

CBL beat me to it: Darwin Award for sure!

Hi... Looking ways to market your blog? try this: http://bit.ly/instantvisitors

Nice to meet you.

I was going to paste the link without permission because I had very felt the interest for your blog.

Please link me with the blog if it is good.

I thought of you, Cube.

Didn't see that one coming...

LeftCoastRebel: Unfortunately so for the late Mr. Looney. I guess the gene pool could use a little more chlorine.

RW: Spot on. Those are rules to live by for all gun owners, with emphasis on the words to "live by."

CrazyBunnyLady: Oh yeah. He's in the running for that.

Ananda Girl: I hear you. I feel for his poor girl friend who, after being subjected to a "gun safety" lesson by an obvious moron, she saw him blow his brains out in front of her. That is not a sight that is easily forgotten.

JanuskieZ: Thanks for coming by, but I really prefer having a totally unmarketable blog with non-existent traffic ;-)

hiro: I'm sorry, but I can't read Japanese. I wish I could, though.

Jen: You beat me to CBF today! I thought the video was hilarious. Not the kind of cat behavior I've ever seen.

Brooke: I wonder if alcohol was involved at all. I read in the story that they were headed to the gun range and Lonne insisted on giving his girlfriend a "gun safety" lesson. Who drinks before going to the gun range? Maybe he was just a careless fool.

I lurrrve that you answer the comments of spammers.

I totally agree that the poor woman will be scarred for life.

Is it true that in the colonies, every family was required to own a working gun and know how to use it, and this was regularly tested?

birdwoman: Some spammers are worth toying with, most are not.

I think most colonists had guns out of necessity. I don't know if it was a requirement.

BTW I think it's wise that people take gun safety classes before owning a gun. I'm all for responsible gun ownership.