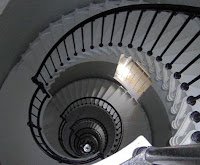 A British nuclear expert has fallen to his death from the 17th floor of the United Nations offices in Vienna.

A UN spokesman in the Austrian capital said there were no "suspicious circumstances" surrounding the man's death.

Typical. Move along. Nothing to see here.

Except that four months ago another UN worker also believed to be British fell from a similar height in the same building.

Could this be a case of pro-active defenestration without the window?

Or should the UN officials be more careful about where they discard their banana peels?
Posted by cube at 10:33 AM

I typically discount conspiracy theories, but TWO such falls? Somebody got some 'splainin' to do.

Could be coincidence if anyone ever believes in those.

That is so weird. Nothing suspicious? Hummmmm

That is a bit odd. Both British.

I bet Scotland Yard is all over this.

Just keeping everyone on message.

you just wanted to use the word defenestration. Not that I blame you.

Chuck: I can only hope everyone stays on The BLOG message...

Birdwoman: Thank goodness someone caught the reference... I do love the word, but I didn't use it in vain.