First Of The Storm 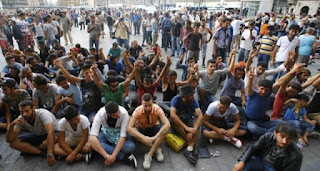 "The future must not belong to those who insult the Prophet of Islam." - barack hussein obama (or whatever his name really is)

I wonder if in the wake of the terror attacks in Paris, Obama will change his perspective on islam...

"I will stand with the Muslims should the political winds shift in an ugly direction." - barack hussein obama (or whatever his name really is)

Naw. I see obama doubling down on anti-American policies and letting in countless more "innocent refugees" past our borders.

We need a president who stands with America. Remember that on election day in Novemeber, 2016... if we survive the coming storm.

I've said from the beginning that he's a Muslim sympathizer. And he is. He's also the worst president in my lifetime.

Munich STepdaughter just told me that car agencies in Munich are now buying dogs ... they'd had so many cars stolen by 'refugees' and then put up fences which didn't help. They got the dogs...NO MORE STEALING. Get a DOG.

It still boggles my mind that people don't realize what is going on, or choose to ignore it.

Everything he does is never in the interest of the country. Everything.

And the refugees are mainly young men. Where are the women and children?

At least we are armed here. The sane among us anyway.

"if we survive the coming storm"... and IF we FINALLY elect a conservative president with conservative principals. A 30+ year drought for this is long enough.

Scrutinize this map...IMPORTING ISIS: See Where Obama Is Resettling Syrian "Refugees" in the United States!

Kid,
I'm getting saner by the day!

At least one of the Paris bombers came in with a group of refugees. Makes it difficult to be humanitarians.

Sandee: I hear ya. Obola can inflict a lot of damage before he's done.

Z: Very good point. Moslems hate dogs. I have two... a German Shepherd who weighs 104 lbs. and a Doberman who weighs 90+ lbs.

Jan: You're right. He's always on the wrong side of anything good for the country. Not that a refugee would be disingenuous about his back story, but when asked where the women and children are, they say they've come ahead and the family will come when they're settled. In most cultures the men send the women and children to safety and they stay to fight in the war... well, in non-barbarous cultures.

Kid: We've been sane for decades. We're working on getting our two daughters sane as well.

DaBlade: Amen to that, but Obola can do a lot of damage before the next election.

Always On Watch: I checked out the map. It makes me furious to think of the monsters the DC monster is letting in our country.

As for getting sane, absolutely. Also, we need to take the fight to the liberal government that allows the influx of terrorists under the guise of humanitarianism, and to academia & the MSM that push the PC culture upon us and frown upon any dissenting views on the matter.

Granny Annie: It sure does. The term 'wolf in sheep's clothing' comes to mind.