No Ammo For Troops? 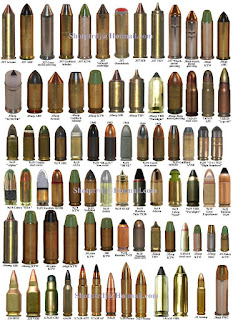 Byron York: US Ran Out Of Ammo In Attack On Isis Tanker Trucks

How can this be when according to Infowars.com :

"... federal agencies are increasingly hiding their purchases by limiting public information on fbo.gov, it can still be conservatively estimated from available data that the feds have purchased at least 2.11 billion rounds of ammunition since April 2012 which is enough to kill 30% of world's population."

How in the world can our troops run out of ammo when Forbes reports that the DHS has issued an open purchase order for 1.6 BILLION rounds of ammunition total.

1.6 Billion Rounds Of Ammo For Homeland Security? It's Time For A National Conversation

What kind of f**kery is this?

Who is DHS planning to shoot, we have been wondering.

Who knows. With is administration anything is possible.

Sandee: Absolutely. With their record I don't put anything past them, but I know that whatever it is, I'll probably be against it.

I used to laugh at the emails I got of tons of wooden coffins, and the rightwingers all saying they're for us. This is getting less and less funny. I still am holding tight to the fact that this is America, but it's so NOT like America lately that........yikes.
We need Gen Michael Flynn for president!

And yet, do they expect the troops to turn on us when they haven't supported them when they've been out in the field? It's all so convoluted.

"How in the world can our troops run out of ammo when Forbes reports that the DHS has issued an open purchase order for 1.6 BILLION rounds of ammunition"