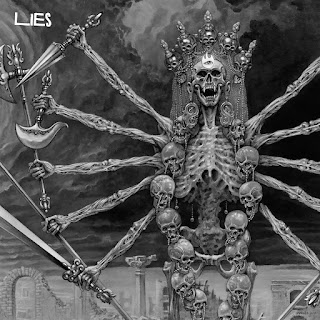 Madagascar has about 400 plague cases per year, or more than half the world’s total, according to a 2016 World Health Organization report.

Health officials suspect that the deadly plague sweeping Madagascar may have a particularly gruesome cause — a local tradition of dancing with dead bodies called “famadihana” and intended to honor their ancestors.

Plague That's Killed Scores Is Blamed On Dances With Corpses

"UN spokesman Stephane Dujarric told reporters that only 26 percent of the $9.5 million needed to combat the outbreak of the often deadly disease has been received."

The UN and the World Health Organization are supposed to keep funneling money into this country despite these ghoulish and decidedly unhygienic practices?

Not all cultures are equal and the sooner multicultural relativity is tossed into the trash heap of history, the better.
Posted by cube at 8:47 PM

If your cultural practice kills you, it's time to can it. Pork eaten rare in some parts of Papua New Guinea comes to mind, as does smoking in our culture.

Messymimi: I agree about canning killer cultural practices, but I disagree about smoking. It isn't easy being a smoker nowadays because our cultural mores are decidedly against it. I don't smoke, but have heard from smokers that they're treated as pariahs when they light up.

Yikes, I didn't know this. This is a practice I doubt anyone can stop either.

Have a fabulous day and weekend. ☺

OMG there will probably be a college course in this

Sandee: I didn't know either. You're right, they're dropping like flies and are still belligerently insisting that the plague is a government conspiracy. There's no fixing stupid.

Jan: You're probably right. It will be featured alongside the courses on the moral equivalency of moslem cultures.

Smoking: Started when I was 10 (bad neighborhood, plus it was 1962) quit at 52 in 2005. I wish I knew how easy it was to quit. Now I can't stand to be around someone who even has the smell of tobacco on their clothes let alone smoke in the air. I had No Idea it was that repulsive. I'm sure many social situations and friendships went by the wayside because of it.

Dancing with corpses. Geez how disgusting. They should get a disease from it.

Kid: Ten? That's sad to hear, but those were different times. Many ex-smokers act the way you do. My father-in-law was a chain smoker, lighting a new cigarette before he put out the one he was smoking, and after he quit he would return a rental car if it smelled like cigarette smoke. It's good that you quit, though, better late than never.

I think the revolting custom of famadihana needs to end. Madagascarans need a lesson in basic health practices. Sheesh.