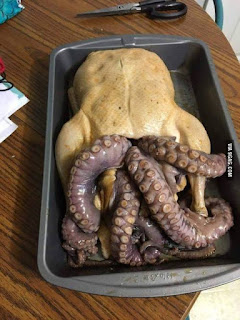 I don't know about you, but I'm still having David Cassidy songs going through my head (why do the news stations only play "I Woke Up In Love This Morning" and not "I Think I Love You"? *shrug* ) and then this morning I woke up to a commercial where Mary Lou Retton (yes, little Mary Lou) was hawking some Australian joint pain medication... feeling old.

Then it occurred to me that my three favorite college football teams lost over the weekend... feeling bad for those kids.

Then daughter #1 dropped off a cat-pee laden cat carrier with a 'hi and goodbye because I'm late for work' excuse (the reason for the cat pee in the carrier is another story)... feeling like I lost a feline friend.

Then a man in a Ford F-150 truck laden with "stuff" in the back pulls into the lot next door where there is new construction underway and Mr. Cube thinks the man is going to dump his "stuff" into the construction dumpster, but the man goes into the Port-O-Potty instead... feeling like [you fill in the blank because I'm still holding out the expectation of becoming president. I mean, if Bill and Barack pulled it off, what the hey, right?]

Then it occurred to me that daughter #2 is leaving today.

It's not been the best of mornings, but then I read this:

Unhinged Coverage Of Trump Is Hurting The Media

And the bottom line of your column is that the media are failing because of Trump... yeah, right.

What is the color of the sky in your world, Mr. Smith?

Meanwhile back to my world, yes, my mood is still foul, but hey, tomorrow is Monday. yah.
Posted by cube at 10:47 AM

Every week they manage to say something else that boggles my mind.

I enjoyed that nypost article you linked.
As to your photo, I've heard of turducken, but that looks like turkracken.

Yep, you and I are watching the same things and coming up with the same conclusions. Bless their hearts. Thirty nine percent. I would have gone far lower than that.

Messymimi: It pays to stay away from the msm.

This is very good information.