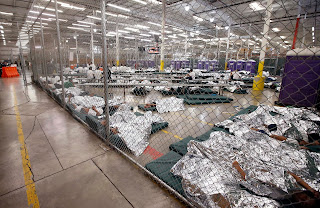 The 24/7 media cycle is full of politicians that are outraged over the Trump administration's handling of illegal alien families. From the coverage, you'd think we were running a gulag.

Yet, (FTA) photos of border detention facilities from the Obama-era, taken during 2014, look nearly identical to the ones taken during the Trump era.

Where was the outrage then?

So please, spare us the fake outrage. We have the right to enforce the laws that govern the entry of illegal aliens into our country. If the illegals don't approve of our laws, they shouldn't come here. Period.

There is a solution and it's disarmingly simple. If you don't want to end up being separated from your child (what AGE are these children? Most are 12-17.5 yrs) don't swim the river or climb over the fence you aren't supposed to climb over. SIMPLE.

The outrage is completely misplaced (yeah, what else is new?) and needs to be directed at parents who send their unaccompanied children from Guatemala, Honduras or El Salvador ACROSS THE MEXICAN BORDER, through Mexico and ACROSS THE US BORDER.

Solve the problem by putting them on a bus to a boat, and sailing the boat, loaded with illegal aliens back to the s-hole countries that they originated from. If they want to apply for asylum, they can petition at the FIRST US CONSULATE or EMBASSY they come to. Starting in their country of origin isn't a bad idea. Or there are half a dozen in Mexico. "Asylum" has become a scam in these situations.

It doesn't matter what good Trump does, they will only focus on their agenda. The left is killing themselves. They don't see that yet, but they are.

The public is more than tired of the false outrage

The outrage is a cover-up and a deflection to mask the IG Revelations.

LL: If you listen to the left, I'm one of those "heartless" conservatives who want to see alien immigrant families torn asunder. Seldom if ever, do we hear the notion that they should
just stay home and preserve the sanctity of their homes in their own homes.

The dems, lusting for votes in the upcoming interim election, are promising champagne and caviar dreams to these poor people, but it shouldn't be on the US taxpayer's dime.

If we had a wall all of this would be moot.

Sandee: I hope they themselves destroy the leftist's chances at a victory in the upcoming interim election, but I'd be happier to see more effort from the GOP. HELLO GOP???

Jan: Yes, we are more than tired of their charades. No more Marquess of Queensbury rules for the right and smash mouth fighting on the left. I vote we even the playing field. It's only fair.

Ed Boderenka: Yes, there's that, but also a position the left sees as a way to cry their way to a victory in November, i.e., "the oh, the children" platform.

The “tender care facilities” did not spring up fully staffed and able to handle small children taken from their families overnight — they’ve been there for years, since long before Trump. Of course, we don’t talk about that.

The people who prosper from illegal immigration (on the right and on the left) don't want a wall. If you want to know who has blood on their hands, watch who votes for what.

I agree. Fake news by fake journalists and fake outrage by fake citizens.

Yep, the fake media crap is real! No presidents are immune,but they are constantly blaming Trump for stuff he didn't come up with.

The civil war is on.
By other means.
It was dems versus repubs last time.

Messymimi: Of course they didn't, but it didn't matter during the boy king's administration.

LL: It's always about the money. Not much changes beyond that.