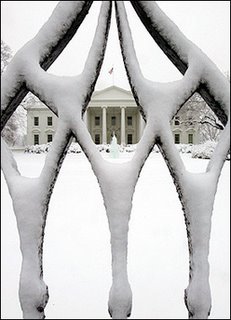 Enough about Cheney's Fuddgate, here is some real news:

The chairman of the House Homeland Security Committee urged the White House on Wednesday to reconsider approval of a sale that would give a company in the United Arab Emirates control over significant operations at six American ports, including New York, New Jersey, and Baltimore.

This transaction doesn't pass the smell test for me. I'm not comfortable with outsourcing the control of major U.S. ports to a Middle-Eastern company.

The White House has the ability to stop this deal. I wish it would.
Posted by cube at 11:44 AM

You bet your bottom dollar this is real news and I smell a rat too.
This needs to be stopped.

That is a scary scary proposition.

This Arab port story, the newly-released saddam tapes, and countless other relevant news stories are being under reported while Fuddgate gets a full court press. Incredible.

oh, sure, we're trying to stop those people from bringing wmd's into our country and we give em our ports.

I'll have to read up on this, but it does sound disconcerting.

No brains, just greed at work in this one. If this does not get stopped, there will be your proof that our government is not working for the safety and interests of the people of this country.

I've been watching this story & the word commerce keeps popping up. The UAE firm bought out the British firm's stake at the ports (not that I was too happy about England owning them either). The administration swears up & down that it has nothing to do with security. I wish I was so sure...