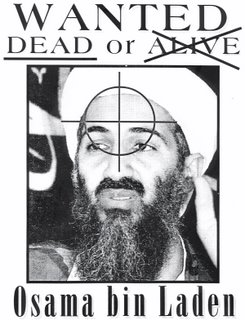 When I read that bin Laden claimed he wouldn't be taken alive, my first thought was, "Um, okay by me, anyone else have a problem with that?"

Good grief, that's the best thing that could happen! There's absolutely no benefit to us to take him alive. We'd have to house him comfortably and pay for legal counsel for damn ever while we carried out a trial, all the while there'd be some dumbass bleeding hearts outside the courthouse moaning and groaning about how we were violating his civil rights because he doesn't have enough cable channels or some such bullshit.

Ooh, sorry, I didn't think I had a rant inside of me today, but I guess I did! Wow, I feel a lot better now, thanks cube!

Cool, so I could exact revenge, collect a hefty bounty, and not be charged with murder in the end.

He would have been captured by now if all resources had been exhausted but our prez chose to go down the wrong road.

Dead, alive... Just as long as there is serious amounts of pain involved in his capture. It's all the same to me.

The sooner, the better.

I wish Sadaam would have been killed instead of this circus of a trial that's going on.

I could not agree with Jen more. She's right on!!

This guy's not dead yet?

I think a bullet in his head is too painless a death. He should suffer. Some people seriously are a waste of space!

karen: are you privy to classified information that the rest of us aren't?

tlm: pain is good, but pain followed by death is better.

j.d.: saddam & his big mouth should have been suffocated in the little spider hole.

monika: I'm with you.

Bin Ladin is a good reason for the death penalty.

Works for me! He REALLY must be delusional to think we would care.