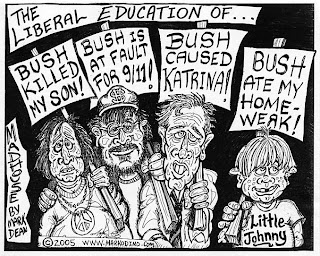 According to the study from NY University & the University of California, political orientation is related to differences in how the brain processes information.

The subjects were instructed to tap a keyboard when an M appeared and refrain from tapping when they saw a W. According to the researchers, "liberals had more brain activity and made fewer mistakes than conservatives when they saw a W", while both were equally accurate in recognizing M.

Lead author, David Amodio, asst. prof of psychology at NYU, cautioned against concluding that one political orientation was better. "The tendency of conservatives to block distracting information could be a good thing depending on the situation, he said.

Talk about a convenient study. I may have to use my slow, rigidly-structured, mistake-prone conservative brain to block this distracting study!

What next? Conservatives emit more body odor than liberals?

[The BLOG note: Cartoon via Mark Dean. See many more at markdino.com ]
Posted by cube at 11:47 AM

yes, but we stink purty!

what about the folks who are fiscally conservative but socially liberal, or vice versa?

is it not terribly structured, or conservative, to think that all people are one *or* the other? So we can conclude that the authors of this study are what they would call "conservative" which means that they have, by their own admission, discounted any data that didn't fit their perceptions (read: agenda).

bw: The entire premise of the study sounds flawed to me on many levels. One being that they refer to increased brain activity in "liberal" brains -- well, epilepsy is increased activity also, therefore, an increase isn't necessarily a good thing as they have concluded.

Basically my problem is this, if liberals are so smart, why do they arrive at such emotionally-driven, yet logically backrupt decisions?

p.s. i'm NOT going to allow bush to take full credit for katrina - i'm co-responsible as i noticed it coming for two solid weeks and failed to notify the proper authorities.....so, yes, i am complicit...

Why not try this profoundly conservative (but not right wing)and closely reasoned essay instead.